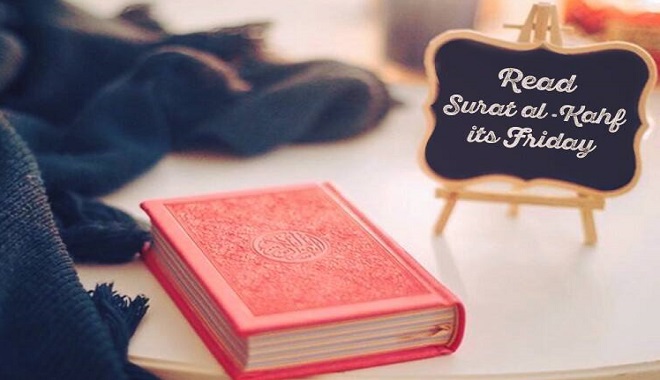 Contrary to what a lot of us think, surah Al-kahf is not some kind of culture we practice every Friday, I was shocked when a sister told me she only recites the surah because she felt it was just a norm to recite it every Friday,. I was getting ready to blog about the benefit of the surah when I came across this post on Facebook by Qurani Duaain where he talked about benefits of reciting surah Al-Kahf every Friday, So I thought I would share it with you guys …..

“Insha Allah, you will get in the habit of reading Suratul Kahf every Friday. You can begin on Thursday evening as it is technically “the night of Friday” once Maghrib has arrived.

Something to make it easier is to read along with a well-known reciter.

18th Surah in the Qur’an

Preferences of the Surah

There are many ahadeeth that enumerate the blessings of this surah in its entirety and regarding the first or last ten ayat.

[My note: Subhaanallah, I truly marvel at all the ways, the opportunities Allah, Most Merciful, gives us to reach Paradise and to protect us from harm. So many of the above ahadeeth make reference to the Dajjal. Now, we may read this and think, “Well, the chances are slim that we’ll be confronted with this situation,” however, we never know. We know that the emergence of the Dajjal is to happen during the last days before Yaumul Qiyammah, but these “days” are not the 24 hours that make up our daily lives, no, these are really time periods that are set to happen by our Creator, azzau wa jal.

I recall my first readings about the Dajjal and it did scare me a bit because he will seem to be so powerful and will be able to produce many miracles or what will seem to be miracles. Many good people will be fooled or deceived by him and follow. It will be disconcerting to others to see known pious or good people followi ng what the Dajjal says. This is very scary and it will tend to mislead those weak in faith. It will be an extremely trying time and the fact that he will be given the ability to offer people a choice between what seems to be certain death or life where that which appears as death (fire) will actually be safe is very frightening, but the true believer, when forced to make that decision will choose fire rather than kufr. It will be very frightening. We don’t know exactly how this will occur or even when, but we have seen many of the signs of the last days come to pass so it is not farfetched to feel, to think that we are living in some of the last days before the Last Day.

We can achieve this great protection by memorizing a few words — subhaallah wa nashkurahu] About the Surah Suratul Kahf is a Makkan surah and it is one of five surahs that begin with the phrase “Al Hamdulillah” ; they are — Al Faatihah, Al-An’aam, Al Kahf, Saba’ and Faatir. Each of these surahs beginwith praising Allah, jala wa ‘ala, and His Holiness, recognizing His Greatness, Magnificence, Majesty and Perfection. This surah brings us three inspiring and impressive Qur’anic stories, by way of / or for the purpose of confirming its basic purpose of extablishing the correct Aqeedah (Islamic beliefs) and faith in the greatness of the Lord, Full of Majest and Honor.

As for the first story, it is the story of ‘As-haabul Kahf — the Companions of the Cave, a story which clarifies Islamic beliefs, a story about several believing youths who flea their country for the sake of their religion and take refuge in a mountain cave, then remain there asleep for 309 years. Then Allah reawakens them after this lengthy period.

The second story is the story of the Prophet Musa ~ ~ with Al-Khidr. It is a story having to do with seeking knowledge, and information or knowledge of the unseen (‘ilmul ghaib) which Allah chooses to make know to “al ‘abd as-saalih” Al-Khidr whilst Musa does not know until Al-Khidr) informs him, like the story of the boat, the circumstances around the killing of the youth and the building of the wall.

The third story is of “Thul Qarnain”, a king makannu Allah with taqwa (fear of Allah) and a heightened sense of justice, to extend his powers over the inhabited world and to possess mushaariq al ard wa maghaaribaha – the East of the earth and its West, and the issue of his building a great dam.

Just as the surah uses, for the purpose of its intent, these three stories, it also uses impressive examples in order to explain that the truth is not connected or linked to great wealth or power or sovereignty; it is only tied to correct beliefs. The first example give is the wealthy person who is extremely rich and the poor person “al m’utaza by his beliefs and his belief in the story of the companions of the gardens. The second example given is the “hayatu dunya” or the life of this world and what it consists of. The third example is of the arrogance, pride and deception of Iblis which resulted in his refusal to bow down before Adam ~ alaihi as salaam ` wa ma naalahu min at tarrad wal hurmaan.

Each of these stories and examples are meant to be taken as a lesson or moral as well as points for reflection.

The Name of the Surah- It is named Suratul Kahf because of the miraculous divine story in it, the wondrous, strange story of the Companions of the Cave….

Honestly he has said it all, After reading that, I had nothing to add, Reciting surah Al-Kahf every Friday is a strong sunnah and it is something we should do for our good….I ask Allah s.w.t to make it easy for everyone of us…Amin…