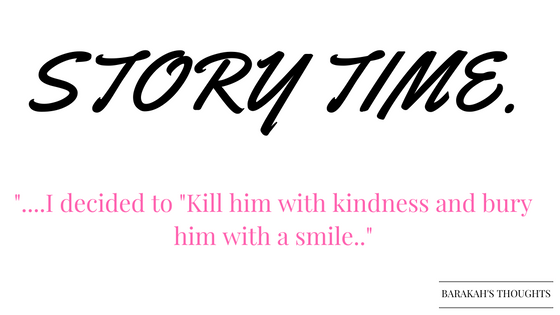 It’s story time guys.. Hurray! so I watched a video on Adanna David’s channel,where she spoke about “Killing them with kindness..” so i thought why not do some story telling?

You will agree with me that there are some people you don’t talk to but you sure do observe them. So there was this guy in my class, who had this rude and domineering attitude, we never talk but we see each other everyday and i had no reason whatsoever to smile at him because i usually wouldn’t like the way he approached people.

On this faithful day, we were told to pick keys to our various lockers for a class and this guy decided to pick my key and occupy my seat, Helllllloooo, where are you even coming from?

I nicely walked up to him and said excuse me, you have just occupied my seat, he said, Really? I said Yes. He Repeated Really, I said Absolutely, Then he started speaking in his language and then flung my key while imitating me, bare in my mind, this was in the presence of my colleagues, A friend walked up to me and said, “this is not you, nobody bullies you, you never allow this, Why did you just allow him to go like that? ”

I couldn’t explain it, I felt he was just going to come back, i felt he was desperately going to need me for something, I didn’t know when  I just knew the perfect time was coming. Oh yes! the perfect time did came an hour later, in the same class, his group needed a slide which only me had in the class, they did ask him to get the slide from me, but he was hesitant, i saw that and i was like, Well done! I smiled and gave them the slide.

The next day, he needed a pen badly in the class and i was the only one close to him (seat wise) to get a pen from, He had to text his friend to help him ask for the pen from me, his friend was like ask her, she is going to give you…. and again i went Well done! I smiled and handed him the pen.

My friend was wondering why i refused to use those opportunities to get back at him,but the thing is, Is that really going to yield satisfaction?  probably i will end up being the one to go and apologize at the end of the day.

So instead of getting back at him, I decided to “Kill him with kindness and bury him with a smile..” and guess what, he apologized  for his actions and now we are cool…

Thank you for stopping by..

8 thoughts on “STORY TIME: HE WAS JUST DISRESPECTFUL”